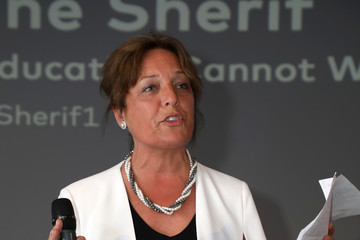 The director of Education Cannot Wait (ECW), Yasmine Sherif, met the APPG today to discuss the organisation’s upcoming replenishment, when the fund will seek new financial commitments from funders.

ECW is the first global fund dedicated to delivering education for girls and boys in countries affected by wars, disasters and crises. It was launched at the World Humanitarian Summit in 2016 by a coalition of international aid agencies, including DfID, in order to usher in faster and more sustainable education responses in crisis settings. Since its start, ECW has reached more than 1.3m children and youth with quality education.

In order to continue doing its life changing work, ECW is seeking to raise $1.8bn. This will enable ECW to provide education for 8.9m children and youth in conflict and crisis settings. UK civil society are calling on DfID to pledge £75m over three years to ECW.

Addressing MPs, Ms Sherif shone a light on the scale of the problem, explaining that an estimated 75m girls and boys globally have limited or no access to education due to crisis and conflicts around the globe – greater than the population of the UK.

Ms Sherif explained many of the complexities involved in delivering education to children in different crisis settings. For example, she explained that to deliver education for Internally Displaced People (IDPs) is often even more difficult than for refugees in other contexts due to the fact that the government, who would usually assist with operations, can prevent access.

DfID has historically been a leading donor to ECW. DfID pledged £30m ($38.7m) to ECW for the first round of funding (2016-18), making it the third largest donor after Denmark ($73.4m) and Canada ($53m).  In order for ECW to continue to scale up its operation, DfID will need to scale up its financial support for the organisation. As the meeting concluded, MPs pledged to continue to press the Government on this important issue.